When is whale watching season in Monterey Bay? Every month of the year! It’s over a 90% chance you’ll see a whale on any given month because our two main seasons, the feeding season and the migrating season overlap. Try going different times of the year to experience the variety of wildlife that flourishes in the nutrient-rich waters of the Monterey Bay.

Read on to learn which whales you can expect to see during your visit. 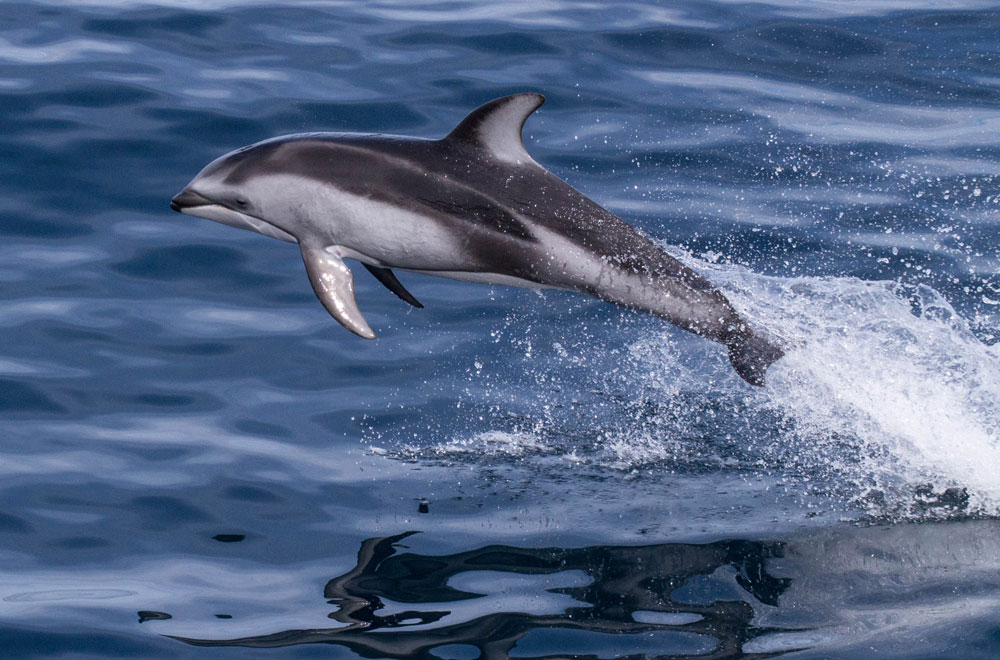 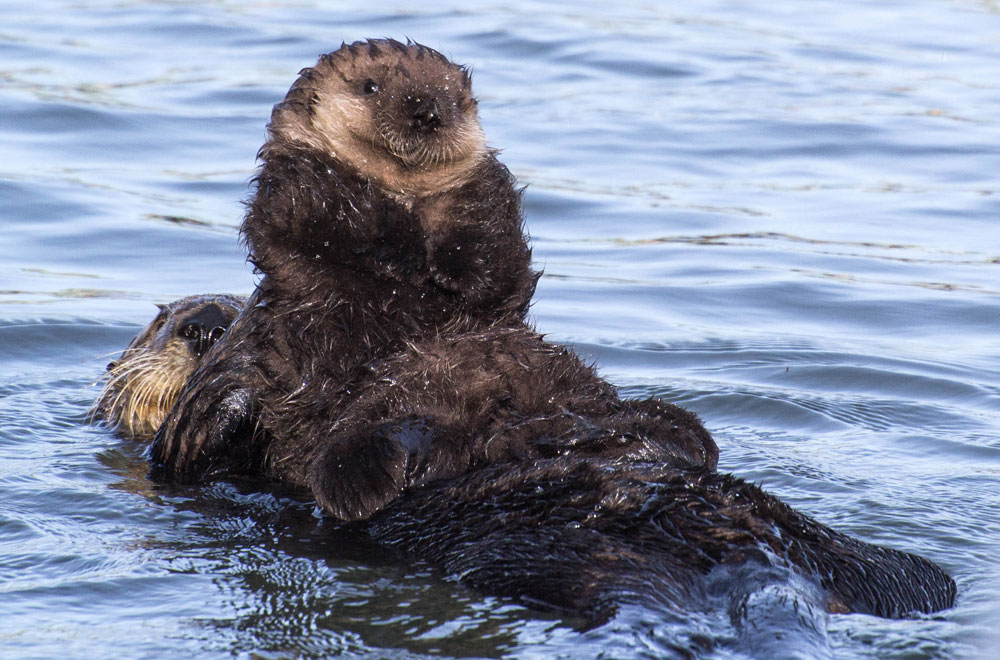 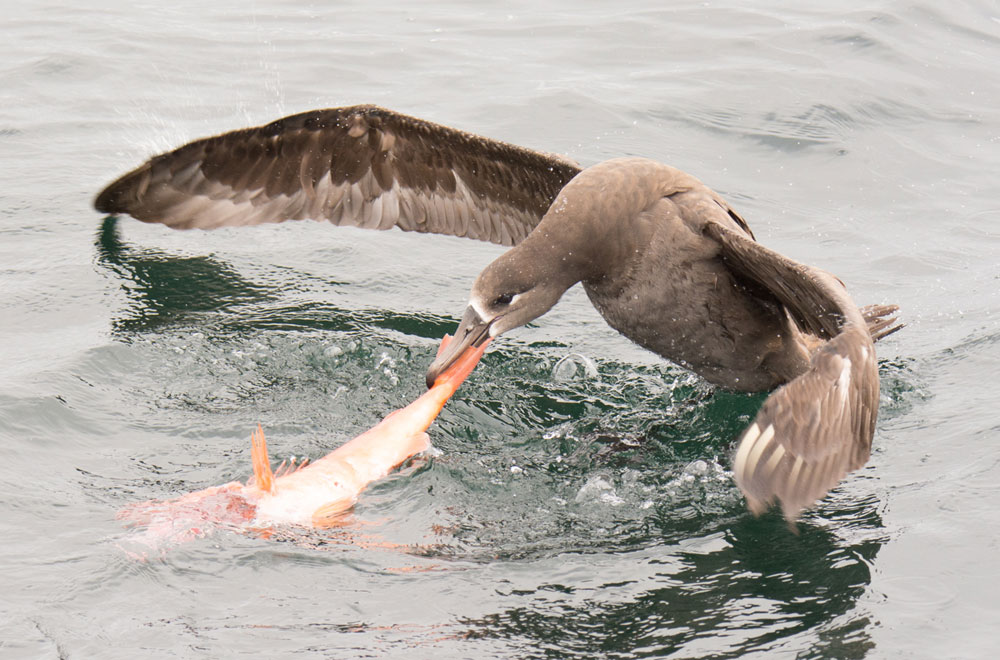 Humpback whales migrate from their warm, winter breeding grounds off the coast of Central America to feed in the nutrient-rich waters of the Monterey Bay throughout the spring, summer and fall. Depending on food distribution, some humpbacks remain in the bay and feed during the winter as well.

Regarded as the most acrobatic of the whales, humpbacks are often seen breaching, tail-throwing, tail-lobbing and pec-slapping. Surface lunge-feeding is also observed here, where whales trap krill or schooling fish at the surface and lunge out of the water with their mouths open.

While often spotted alone or in pairs, if food is abundant feeding groups of 40-50 can be encountered.

BEST time to see humpback whales in Monterey Bay: March through November, with peak sightings generally during July and August (though every season is different).

Gray whales are spotted migrating through the Monterey Bay December through mid-May. In the summertime, grays are in the Bering and Chukchi seas of Alaska plowing the sea floor with open mouths to feed on creatures that live in bottom sediments. Gray whales also opportunistically feed on mid-water prey during their migration (we’ve observed them skim-feeding on krill in the Monterey Bay).

We first observe the gray whales heading south on their way to their breeding grounds in the protected lagoons of Baja California and then again on their journey north to the Bering and Chukchi seas in Alaska; a round trip of about 10,000-14,000 miles. Mothers and calves are typically the last to leave the breeding grounds and are spotted here in April and May.

BEST time to see gray whales in Monterey Bay: December-May, with peaks in January and again in March.

The most common type spotted in the Monterey Bay is the transient killer whales who will hunt seals, sea lions, dolphins, porpoises and whales (typically gray whale calves and minke whales). Transients are often found in matriarch pods consisting of a female and her offspring (and even her offspring’s offspring). Though we frequently encounter lone adult males who are most likely orphans.

BEST time to see killer whales in Monterey Bay: mid-April through mid-May,  and late August through October. Though killer whale sightings may occur any time of the year.

Blue whales are the most massive animals on earth, ever. More massive than any dinosaur that ever existed. And they feed almost exclusively on krill, a tiny shrimp-like creature no bigger than your pinky nail. Here in the Northern Hemisphere blue whales can reach lengths of 80-90ft, whereas blue whales in the Southern Hemisphere get a bit larger at 90-100ft.

Blue whales are gray-blue in color with a subtle mottling pattern that helps with identifying individuals. Incredibly streamlined, these whales can reach burst speeds of over 30mph.

BEST time to see blue whales in Monterey Bay: May through October, with peaks generally in July and August depending on krill abundance.

Northern right whale dolphins are the only species of dolphin found in the North Pacific Ocean that lacks a dorsal fin. Averaging 6-10 feet, these incredibly sleek-looking dolphins often travel in herds of over a hundred.

In the Monterey Bay, Northern right whale dolphins are commonly seen mixed with Pacific white-sided dolphins and Risso’s dolphins. While not frequently encountered, the Monterey Bay has been determined the best place in the world to observe them.

Risso’s dolphins are a very large species averaging 12-13ft. They lack the common “beak” most dolphins exhibit and instead have a blunt-shaped head much like pilot whales or false killer whales. Their bodies are covered in conspicuous scars mostly inflicted by squid, their preferred prey.

Often found in groups of around 30 individuals, they’re also seen in herds of hundreds or even thousands. Unlike most other dolphin species, Risso’s are not avid bow-riders but they do exhibit impressive aerial displays.

Common dolphins got their name because they are the most abundant species of dolphin on the planet. Larger populations are encountered off Southern California however these dolphins frequent Monterey Bay waters in the winter.

Long-beaked common dolphins are encountered more often due to their preference for near-shore waters whereas short-beaked are seen further offshore. Both species are incredibly boat friendly and enjoy bow-riding.

These very social dolphins can be spotted all year round in groups of 10 to hundreds. Pacific white-sided dolphins often mix with Risso’s dolphins and Northern right whale dolphins.

Bottlenose dolphins are another very large species capable of reaching 12.5ft. They often travel in small groups of 2-15 very close to shore (even in the surf line). They are the species most often observed from land.

Bottlenose dolphins can be encountered all year especially if they happen to be passing by the harbor mouth or even inside the harbor searching for food!

Dall’s porpoise are stocky and robust with a striking black and white pattern. They might be the fastest of all cetaceans capable of reaching speeds of over 30mph.

Their fast movements through the water produce a “rooster-tail”, or a bow wave off their head and body that creates a hollow cone to breathe through while still under the surface.

OTHER WILDLIFE IN MONTEREY BAY

California sea lions are typically the first animal we spot on tours since they love to haul out on docks in Moss Landing Harbor. Most of the sea lions encountered here are males that can weigh over 800lbs when full grown.

They’re famous for their intelligence, playfulness and loud barking. They range in color from dark brown to blonde and have a dog-like face.

Southern sea otters are the smallest marine mammal in North America and the only exclusively marine member of the weasel family. Sea otters are abundant in Moss Landing Harbor and the adjoining Elkhorn Slough.

While most marine mammals use blubber to keep warm, sea otters use a double layer of the densest fur of any mammal.

Pacific harbor seals often haul out on a sandbar in Moss Landing’s north harbor. They range in color from white or gray to black or dark brown and have a spotted coat. Pups are weaned and on their own at just 4 weeks old.

Unlike sea lions, harbor seals cannot rotate their hind flippers underneath them so when they haul out, they scoot across the ground on their bellies.

Spotting a leatherback sea turtle is a rare and delightful occasion. They primarily migrate from Indonesia to the Pacific coast to feed on jellies. Sightings of leatherback sea turtles in the Monterey Bay occur most often in the fall, or when sea nettle jellies (their favorite) are abundant.

Leatherbacks can reach 8ft in length and weigh over 2000lbs. They are extremely endangered due to pollution, egg harvesting, and accidental bycatch.

The heaviest of the bony fish, Mola molas can reach 10ft long, 14ft high and weigh over 5,000lbs. They have a saucer-like body with large dorsal and ventral fins.

They’re commonly sighted in Monterey Bay lying on their sides at the surface – supposedly to attract the attention of birds who will eat the parasites off their bodies or to possibly to warm up in the sun.

Sooty shearwaters breed on islands near New Zealand, Australia and Chile during September and October before following a figure-8 migration pattern through the Northern Hemisphere and then southward again – passing through Monterey Bay in summer and early fall to feed.

While not related to penguins, common murres share a lot of the same habits. They use their wings to propel themselves underwater, females tuck their single egg on top of their feet to incubate it, and mating pairs are monogamous. After the chick leaves the nest, the father murre will accompany it for almost a year, teach it how to fish.

Black-footed albatross are impressive birds with a wingspan of about 7 feet. They lock their wings in place and glide from their breeding grounds on the islands of Hawaii to California’s central coast to feed. They’re frequently found scavenging near hunting killer whales.